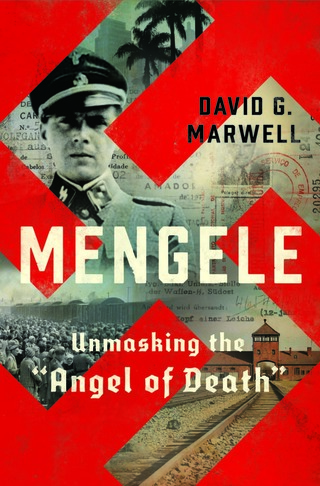 "Historian David G. Marwell seeks to answer the question of what made the German doctor a byword for evil..."

"Has much new to tell us, both about Mengele himself and, more significant, about the social and scientific milieu that allowed him to flourish."
-- Adam Gopnik, The New Yorker (Click here to read the review)

"David Marwell's "Mengele: Unmasking the Angel of Death" is a fine addition to other biographies of the evil doctor, as it is partly a biography and partly a memoir, as historian David Marwell was the U.S. Justice Department's chief of investigative research in the Office of Special Investigations in the 1980s."

"Marwell comprehensively recounts this case of justice denied, and how — helped by his wealthy family, loyal friends and Nazi sympathizers — Mengele succeeded in evading his would-be captors...."

"Drawing from new sources and scholarship, historian David Marwell has written a compelling work that dispels many of the myths obscuring the identity of the infamous physician. Mengele: Unmasking the "Angel of Death" is at once a compact biography of the notorious war criminal, a detailed account of Mengele's flight to South America, and an absorbing narrative of the quest to bring him to justice. Marwell is at his best and most fascinating when he is separating the historical Mengele from the conjecture and half-truths that surround him."

"It must be the most thorough-going account of Mengele's life available to date, a calm and professional read, but one that inevitably makes you want to look away."

"Marwell's account is an adventure in pathology and criminology..."

"Mengele is part biography, part thriller, part detective story. But it is all history, thoroughly investigated and meticulously documented.... Marwell's skills as a historian, combined with his real-life involvement, have enabled him to create a sound and thorough study without a trace of academic dryness...."

"With a distinctive blend of history and political intrigue, Marwell creates a thorough account of one of the most well-known war criminals in history and the efforts to bring him to justice. A worthy addition to Holocaust scholarship"

"A chilling biography of the terrifying doctor who led a charmed life through the Nazi ranks―and eluded justice for decades....Marwell engrossingly describes the capture process....An eerily engaging life's work by a dogged researcher that adds materially to the Holocaust documentation."

"Richly detailed. . . this harrowing, revelatory account answers nearly every question history buffs will have about WWII's 'Angel of Death.'"

"Sharply written. Part-biography, part-memoir, Mengele is an outstanding achievement that conveys a sense of the man behind the myths and the difficulties of bringing closure for his victims."

"In MENGELE, David Marwell has written the final and fascinating history of the 'Angel of Death'. His prodigious research results in many new insights into one of the most notorious Nazis. Marwell is convincing in unlocking the long-standing mystery of what motivated Mengele to undertake his gruesome medical experiments on twin children. He also manages to fill in important gaps in Mengele's postwar life on the run and conclusively settles any lingering questions about whether the bones unearthed in 1985 in another man's grave in Brazil were those of the fugitive war criminal. Marwell, who played a personal role in some of the events he recounts, displays not only the refined eye of a historian but emerges as a talented storyteller. The often infuriating tale he sets forth moves along effortlessly. At long last, in this important book, Mengele has been captured.

"This is a book that only David Marwell could write after half a lifetime of studying and pursuing Josef Mengele. Marwell does more than portray the man, he details his multiple escapes, identities and careers, the 34-year search for his capture, the political intrigues, and rivalries between countries, Nazi hunters and intelligence agencies that led to Mengele's grave. A fascinating story of great importance."

"Marwell's lucid and legend-busting account of Josef Mengele's life and deeds—and of the intricate and elaborate detective work required to find and conclusively identify him—is both absorbing and authoritative."

--Peter Hayes, author of Why: Explaining the Holocaust

"A fresh perspective on the notorious Auschwitz doctor, from his infamous experiments to the decades-long postwar search for him. Never losing sight of Mengele's monstrous activities, Marwell tackles common myths (why was Mengele really interested in twins? And why his fascination with eye color?) and, chillingly, traces the underlying links between his "research" and respected scientific institutions. Further: as an Office of Special Investigations historian committed to tracking down this elusive mass murderer, Marwell brings special insight and a wealth of detail to his riveting discovery tale."

"David Marwell's Mengele is a fascinating historical work. How did Dr. Mengele come to epitomize the many medical atrocities committed by trained doctors at Auschwitz? How did he escape? How was he (almost) found? But it is far more than just exceptionally solid scholarship. It is also a thriller and a first-rate detective story written by someone who was part of the team that had to unravel this mystery."

"David Marwell's is a credible and authoritative voice on Josef Mengele and his role in the Holocaust. Marwell's biography of Mengele offers a compelling depiction of Mengele as a man, as a monster, and as a symbol of the Nazi experiment of remaking the world. Anyone wanting to understand the perverse mentality of hate that lay at the center of Nazism needs to read this book."

--Abraham F. Foxman, Director of the Center for the Study of Anti-Semitism at the Museum of Jewish Heritage & National Director Emeritus of ADL